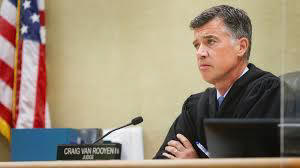 San Luis Obispo Superior Court Judge Craig van Rooyen told Deputy District Attorney Christopher Peuvrelle that due to there not being enough evidence to show that Paul Flores raped Kristen Smart back in 1996, before he allegedly murdered her, the two rape charges will be excluded from his case.

The judge let the deputy DA know that although he doesn’t believe Paul Flores will walk through “the Pearly Gates” that he, the deputy DA, risk getting the murder case “Cosby” out if the court adds the Los Angeles County sexual assault charges as evidence of Paul Flores raping Kristen Smart before he allegedly killed her.

“There’s no evidence of a sex crime in the charged crime (the murder case) itself. Proof of the LA charges can’t act as a substitute…for the SLO case,” is what Judge Craig van Rooyen.

The reason “there’s no evidence of a sex crime” is because Paul Flores and his daddy, Ruben Flores, allegedly got rid of Kristen Smart’s body which forensic scientists need in order to conduct tests that will determine if Paul Flores raped her before he allegedly killed her.

Christopher Peuvrelle tried his darnedest to get those rape charges added to the murder charge. He let the judge know that the investigators found all kinds of evidence showing that Paul Flores loves to do nothing but “Cosby” women.

“Paul Flores is a defendant who likes to rape and drug intoxicated women,” is what the San Luis Obispo Tribune folks quoted the deputy DA as saying to the judge.

Christopher Peuvrelle described Paul Flores as a nasty “Cosby” who is one of the dumbest alleged criminals in all of creation. Like a dumb drug dealer who labels his bags of dope cocaine, methamphetamine, and fentanyl, Paul Flores labeled his how to rape and drug women videos “Practice.”

Needless to say, the investigators were happy that the “genius” did the work for them because they didn’t have to sit and look through a treasure trove of nasty tapes.

Being the “genius” of a criminal that he is, Paul Flores went the extra mile for the investigators by leaving out for them the date rape pills that he allegedly used during his test on drugging and raping “Real Drunken Girls” who were knocked out.

Paul Flores’ lawyer, Robert Sanger, says his client doesn’t have a “Cosby” raping bone or killing bone in his body. And that it was in fact Kristen Smart who kidnapped herself and went to Hawaii. “(The Flores family) says they hope Kristen Smart shows up someday. She still might,” is what the San Luis Obispo Tribune folks quoted Robert Sanger as fixing his lips to say.

The only problem with all of that is all of the evidence from the disturbed dirt under Ruben Flores’ deck, chemicals used to get rid of a dead body, to the blood being found all say that Paul Flores is as guilty as a murderer with bloodied sheets buried in a shallow grave on his land.