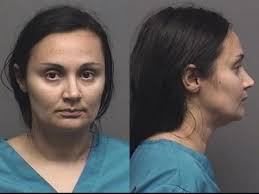 
Letecia Stauch asks the court for
new lawyers a little over a month
after being found competent to
stand trial
by Nathan'ette Burdine: February 23, 2021
Tweet
Follow @nbnylemagazine

A little over a month after failing to get the court to say that she is loonier than a squirrel juiced up on Red Bull and Mountain Dew who needs to be in the forever care of a psych doctor, Letecia Stauch is now using the “self-representation” defense tactic in order to stall and delay her murder trial that will determine if she should spend the rest of her life in prison for killing her 11-year-old stepson Gannon Stauch and then allegedly driving from Colorado to Santa Rosa County, Florida, to dispose of his dead body.

Last Friday during a conflict of interest hearing that was held via video conference, Letecia Stauch told Fourth Judicial District Court Judge Will Bain that she wants new lawyers.

An Arguello advisement is a hearing set aside to make sure that the state isn’t violating a defendant’s Sixth Amendment right “to have the assistance of counsel for his defence,” as well as to make sure the defendant understands the full impact of her decision on her case to either change lawyers or to represent herself.

The Arguello advisement came about after the State Supreme Court of Colorado ruled, back on April 17, 1989, in the People v. Arguello case that the state had denied Fidel Helario Arguello, who was charged with felony escape, a right to counsel.

The second judicial district court, in Denver, Colorado, found Fidel Helario Arguello guilty of felony escape. The State Supreme Court of Colorado ruled “the conviction invalid” and ordered a retrial. “Accordingly, we affirm the court of appeals’ holding that Arguello’s right to counsel had been violated, and remand the case for a new trial,” is what the State Supreme Court of Colorado justices wrote.

The law is the law is the saying. Therefore, it’s quite certain that Judge Will Bain knowing the law is why he’s sent Letecia Stauch and her current lawyers back to Judge Gregory Werner for an Arguello advisement.

The Arguello advisement will be held on Friday, February 26, 2021, 30 minutes before noon. Letecia Stauch has three preliminary hearings that will be held, next month, on March 11, 12, and 15.

Letecia Stauch continues to keep her jail cell bed warm in the El Paso County Jail where she is being held without bond on the charges of first degree murder of a child under 12-years of age, the abuse of a child, tampering with evidence, disposing of a dead body, and eight counts of violent crimes.