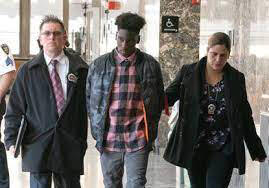 Luchiano Lewis, in the middle, suspect in Tessa Majors' death

Luchiano Lewis is a 16-year-old who faces a maximum sentence of life in prison for his role in the stabbing death and robbery of then 18-year-old Barnard College student Tessa Majors who would have been 20 years old on May 11, 2021.

Luchiano Lewis was 14-years old when he agreed to go on a robbery spree with his friends, then 14-year-old Rashaun Weaver and then 13-year-old Zayirr Davis.

On the night of December 11, 2019, the three ran up on Tessa Majors in Morningside Park.  According to Davis and Lewis, Weaver began beating her with his hands and feet.

Majors fought back the best she could. She scratched and bit Weaver who then turn around and decided that Majors needed to be stabbed for her natural instincts to defend herself against his violent attack on her.

Tessa Majors struggled to get up the stairs in the park where she was able to get the attention of some passer byers after screaming out, “Help me, I’m being robbed.” The ambulance arrived. Tessa Majors ended up dying soon after arriving at the hospital.

Recognizing he was next in line at ol’ Lady Justice’s door to be judge, Luchiano Lewis decided he better start talking so that he could get himself a sweet plea deal like his then 13-year old buddy Zayirr Davis did.

Like Luchiano Lewis, Zayirr Davis was facing a felony charge of second degree murder which carries a maximum sentence of life in prison.

And Zayirr Davis was facing a maximum sentence of life in prison because he told everybody that he gave Rashaun Weaver the knife that Rashaun Weaver allegedly used to stab Tessa Majors to death.

Fortunately for Zayirr Davis, his court appointed lawyer was able to talk the prosecutor and judge into accepting Davis testimony against his two buddies in exchange for a guilty plea to first degree robbery and serving his sentence in a juvenile detention center and not upstate with grown men.

One against two is how things were going for Luchiano Lewis and Rashaun Weaver who were both facing the fiery pit below.

Luchiano Lewis, though, knows his friend Rashaun Weaver and more than likely thought to himself, “I better start talking before he does.”

Therefore, Luchiano Lewis did like Zayirr Davis and pointed the finger at Rashaun Weaver who has decided that his right to remain silent is all he needs to get him out of the knee deep number twos he is standing in.

Sure, Luchiano Lewis has plead guilty to two felonies, second degree murder and first degree robbery, in the death of Tessa Majors and faces a possible life sentence in prison.

However, unlike Rashaun Weaver who will more than likely never see the light of day again, Luchiano Lews’ plea may very well decrease his chances of serving a life sentence to something like 10 to 20 years in prison for the stabbing death of Tessa Major that he and Zayirr Davis say that Rashaun Weaver caused.