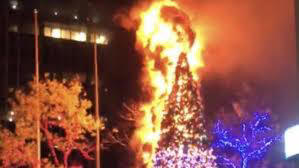 During the pre-dawn hours on the eighth of December 2021, a 49-year-old grown man by the name of Craig Tamanaha got himself soaked in pickle juice after he was caught with a lighter in his pocket which the police believe he used to set Fox News’ Christmas tree ablaze.

Craig Tamanaha is homeless. But hey, don’t let that pull at ya’ heartstrings. Being homeless doesn’t give anybody the right to burn out the Christmas tree’s lights just as being a house wife doesn’t give a woman the right to put out her husband’s woman’s lights.

Right is right and wrong is wrong. And what 49-year-old Craig Tamanaha did to the Fox Newsers Christmas tree was just wrong.

Due to all of the wrong he did, Craig Tamanaha has been hit with a slew of charges that include being a mischief criminal, recklessly endangering everybody, unlawfully setting fires, being a nuisance, and other things.

To be honest with ya’, I doubt those charges will awaken that fella to the error in his ways and cause him to get on the straight and narrow. Craig Tamanaha is known to the police, specifically for drugs and public drunkenness.

He’s no cherub! No siree!