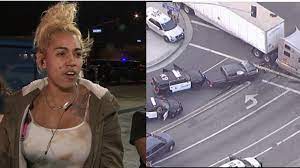 A murder suspect, 35-year-old Michael Caleb Reed, had a female passenger, name Roxy Rich, riding shot gun in the passenger seat during the hours long chase through four California counties (Los Angeles, San Bernardino, Riverside, and San Diego) that ended after a semi-truck cut in front of the driver in Pomona, California. 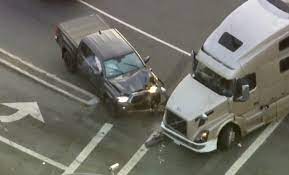 Roxy Rich says that Michael Caleb Reed is a friend of hers and that it is a total surprise to her that he is being accused of murder. “He’s an honest man…I don’t know him like that, but I know him enough to know he’s not a person to murder someone. He had to have a reason to react to an action,” is what she fixed her lips to tell the abc 7 news folks.

Michael Caleb Reed was placed on the Golden Empire Most Wanted list after being identified as a person of interest in the death of a 40-year-old man named Michael Lewis who was killed last month. 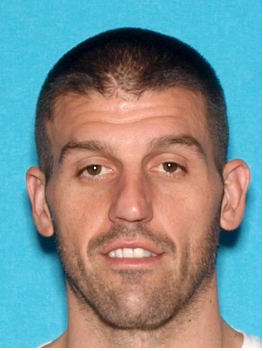 Reed, of course, did what all the “innocent” folks do which is to go on Facebook and profess his innocence by telling everybody that he is as sweet as pie.

Unfortunately for Michael Caleb Reed, his gal pal, Ms. Roxy Rich, did him no favors with her statement to the abc 7 news folks.

It’s quite obvious that Ms. Roxy Rich thinks she is providing her friend with a get out of jail free card by saying he was just defending himself when he was reacting “to an action” that led to him allegedly placing somebody in a forever sleep state. But when the law reads that statement, they interpret that as somebody is guilty of doing all that he is being accused of doing.

It also doesn’t help Reed that he didn’t give up when the police rolled up on him. Instead, he drove like a bat out of hell on the wrong side of the road, all up on the sidewalk. He ran stop lights, almost hit other drivers and pedestrians and shot birds at the police.

All of that is evidence of somebody who’s so guilty to the point that the gasoline on his drawers will meet Satan at hell’s door before he does.

So yeah, if I were the betting type, I would bet all my lil’ nickels and dimes on 35-year-old Michael Caleb Reed going to prison.