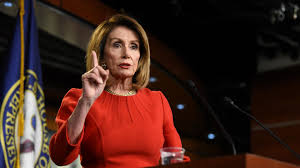 Speaker of the House Nancy Pelosi

CNN’s Manu Raju doesn’t take too kindly to the fact that Speaker of the House Nancy Pelosi (D-CA) refuses to go all “Newt Gingrich” on Donald (Street Corner Don) Trump.

So Raju asked the Speaker of the House why won’t she just keep it real with the Democrats and explain the real reasons why she won’t impeach Street Corner Donald: “Can you explain why you are oppose to launching an impeachment inquiry as many of your members want to do?”

Pelosi looked at the young fella, for a brief moment, before deciding she’d teach him a lesson about Politics 101.

Politics 101 simply says that you don’t do anything that will make the people put you out in the cold and rain.

Here’s how Pelosi put it to Raju, “You might understand it better if you remember these three things. We want to follow the facts to get the truth to the American people. With a recognition, two, that no one is above the law. And three that the president is engage in a cover-up.”

There are those like Rep. Steve “Cold Chicken” Cohen (D-TN) who believe that Donald Trump’s own words and over 700 federal prosecutors agreeing that Trump would be prosecuted if he wasn’t the president gives Nancy Pelosi more than enough evidence to bang that impeachment gavel.

Rep. Brad Sherman (D-CA) and Senator Kamala Harris (D-CA), on the other hand, recognize that they don’t have the votes in the Senate or the support of the American people and therefore should just let the process play out.

Let’s say it again folks, “Politics 101 is a rule that every politician needs to follow if he/she wants to continue having political power.”

If the Democrats move forward with impeachment when the country clearly doesn’t want them to, then the Democrats will end up moving plenty of their colleagues, especially those in Red States, out of the way. And with enough Democrats out of the way, the balance of power will shift over to the Republicans. Just ask former Speaker of the House Newt Gingrich (R-GA) about what happens when a politician doesn’t follow Politics 101.

Gingrich will tell you that impeaching the president, when the people tell you not to, will cripple your party and get you banished to political pundits’ land where a politician has no power whatsoever.

Politics 101 is why former Speaker of the House John Boehner (R-OH)paid no never mind to the noise coming from the Tea Party Caucus members who wanted former President Barack Obama to be impeached.

Boehner didn’t want to be “Newted.” Pelosi isn’t going to get “Newted.” Like Boehner, Pelosi was there in Congress when Gingrich went down. Pelosi isn’t about to let that happen to her. No sir!

Grandmamma Nance has more sense than that.