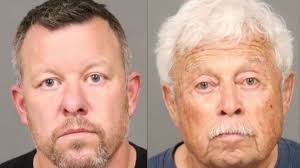 Kristen Smart and Paul Flores were in their freshmen year at California Polytechnic State University in San Luis Obispo when he allegedly killed her.

The father-son duo’s not guilty pleas were entered, yesterday, into the court records. Their lawyer, Robert Sanger, says he doesn’t even know why his clients are being dragged through the mud. Because based upon what he’s seen, the evidence doesn’t amount to a hill of beans. All the evidence, according to the attorney, is he say, she say. “There are also conclusionary statements…by people who admit they have no real evidence and then they opine…Mr. Flores did it,” is what the Associated Press folks quoted Attorney Robert Sanger as saying.

Folks, here’s the thing, though, the state didn’t wait 25 years after Kristen Smart was killed and buried somewhere in the ground in order to bring charges of murder against Paul Flores and the illegal disposing of a dead human body against Ruben Flores on the basis of what Tom, Sharon, Ricky, and Lisa said.

The police have been following the father and son duo for some time, now. During the time the police spent monitoring Paul Flores and Ruben Flores actions, the state has managed to obtain enough evidence from cellphone records, text messages, as well as new witnesses in the case, in order to get enough evidence to convince the court that those two needed to be apprehended and remanded in the state’s custody at least for the duration of the trial.

Basically, nobody woke up on Sunday and decided Paul Flores and Ruben Flores should be arrested on Monday. It has taken the police a long time, 25 years to be exact, to reach the point whereby they were comfortable enough with slapping those “silver bracelets” around the father-duo son’s wrist. Therefore, Attorney Sanger’s whole “he say, she say” argument ain’t gonna be worth the recycle paper that he prints it on.

Paul Flores and Ruben Flores are like a penny in a narrow hole. No matter how much they twist and turn, they won’t get out of the mess they’ve allegedly placed themselves in.

Plus, it doesn’t help Paul Flores that he has a pending gun charge and several sexual assault complaints against him that the LAPD and the San Luis Obispo County Sheriffs are investigating him for.

As a matter of fact, it’s due to all of Paul Flores’ other alleged crimes that he’s being investigated for that the judge decided that no bail is what he will be getting.

The father is a different story. The judge decided to give Ruben Flores bail because unlike he’s son, he doesn’t have a criminal record and the time he would spend in jail, without bail, will be equal to the time he’d spend in prison if he were found guilty for hiding Kristen Smart’s body for 25 years.

“We should not be punishing people before the case has been proved against them. Given the way that murder trials go, I think there’s a fair possibility that if he’s kept in custody he could serve out the maximum…before even being able to test the evidence against him,” is what the Associated Press folks said Judge Craig Van Rooyen said.

The main reason why I believe Judge Craig Van Rooyen decided against denying the daddy, and not the son, bail is due to the daddy being an 80-year-old man who has several health problems which include his bad heart, sugar, and colitis. And the one thing the state doesn’t want is some ol’ fragile man dying in their care.

Therefore, the judge looked at what he was being charged with, his age, and his health and decided that it would be in the interest of the state to keep Rueben Flores alive by keeping him in the environment, on the outside, that has provided him with the healthcare that he needs.

In that way, the state can keep him alive long enough to squeeze information out of him about what his son did, when he did it, why he did it, how he did it, and where he hid who he did all of the what to.