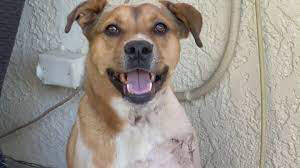 
Rocky the dog beat up the mountain
lion the king of suburbia
by Nathan'ette Burdine: November 6, 2021
Tweet
Follow @nbnylemagazine

He doesn’t care about boundaries. He doesn’t care about respect. Fear and intimidation is what he works on and anyone who doesn’t bow down before him will be put down. At least, that’s what the mountain lion, king of suburbia believed until he ran into Rocky the dog on a cool breezy California night.

Rocky the dog was hanging out by the pool and enjoying the moonlight when he looked up and saw an uninvited guest walking into his domain like he was the king. Not liking what he saw, Rocky got up and confronted the intruder.

“You look more like a Peebles to me than a Rocky.”

Rocky doesn’t take too kindly to insults. So, with his teeth clinched together and his gums a showing, he said to the mountain lion, king of suburbia, “Say that to my face, why don’t you?!”

The mountain lion, king of suburbia walked down from the top of the hill, over to the far end side of the pool where Rocky the dog was standing. No shaking! No whimpering! No nothing.

Rocky the dog just stood there, staring down the behemoth of a beasts. The lil’ canine and the big feline were now nose to nose, breath to breath, eyes to eyes. “You look more like a Peebles to me than a Rocky, pup.” Those words lit a fuse in lil’ Rocky the dog so that he blew out smoke as he jumped the mountain lion, king of suburbia! The sounds of biting, scratching, barking, and growling soon took over the calm California night.

The humans in the house heard all of the commotion going on outside and all but one, the adult female human, Mary Padres, stayed in. The adult human female opened the sliding doors, put her pinky toe out to only put it back in after she saw who Rocky the dog was boxing. The adult human female ran back into the house and got the adult male, Mr. Padres, who, upon seeing the mammoth beast that Rocky the dog was engaged in a fisticuffs with, sheltered himself in place behind the glass door.

Seeing that Rocky the dog had won the fight, the adult human male came from behind the safety of the glass door, ran to where Rocky the dog was, picked him up, and then took him to a veterinarian who patched him up.

Due to Rocky the dog not having all the funds needed in order to cover the patching up cost, his humans have set up a GoFundMe page titled “Help Rocky’s recovery after mountain lion attack.” Poor Rocky. Well, at least he’ll have plenty of pillows to rest himself on.

As a result of Rocky the dog’s vicious attack, he broke a nail, his jaw, sprung his ankle, and he has a dislocated hip and shoulder. He also has two shiners around both eyes and a splintering headache that just won’t go away.

The mountain lion, king of suburbia says he wants Rocky the dog and his humans to pay for his medical expenses and then get out of town.