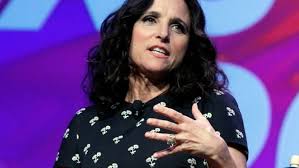 Saturday Night Live (SNL) was such hell for former cast member and Veep star Julia Louis-Dreyfus that it was hotter than Florida in July.

“I was unbelievably naïve and I didn’t really understand how the
dynamics of the place worked. It was very sexist-very sexist.
People were doing crazy drugs at the time. I was oblivious. I just
thought, ‘Oh, wow! He’s got a lot of energy!’ It was a pretty
brutal time, but it was a very informative time for me.”

That’s what Julia Louis-Dreyfus told Stephen Colbert during a sit down at a benefit for Montclair Film at Newark’s New Jersey Performing Arts Center.

I believe her because I hear tell that Lorne Michaels fella is a shepherd for the devil. He goes around bad mouthing folks, and firing good folks like Adam Sandler and Chris Rock.

Sandler and Rock didn’t last a New York minute on SNL. And it wasn’t due to anything they did, it was all because of that Michaels fella who loves keeping up hell just because.

To tell y’all the truth, I wouldn’t be surprise if those folks who were snorting all of that white power were doing it so they could see rainbows and unicorns and not Michaels devil horns.

Dreyfus told Colbert that her time at SNL was when she realized that she wasn’t going to take “anymore of this crap” unless “it was fun.” “It is important and so basic, but I just felt like, ‘I don’t have to; I don’t have to do this, I don’t have to walk and crawl through this kind of nasty glass if it’s not ultimately going to be fulfilling. And so that’s how I sort of moved forward from that moment and I sort of applied that kind of ‘fun meter’ to every job I’ve had since and it definitely has been very helpful.’"