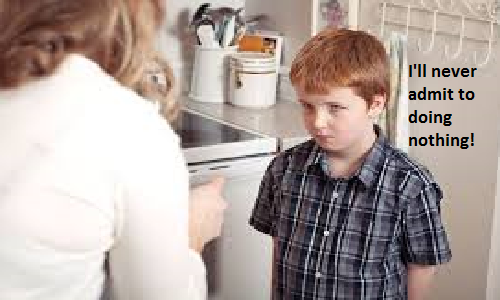 Bad kid being scolded by his mother

Let’s look at this simple example of turning a white shirt blue. You ask one of the children who washed the clothes and in unison they all say, “I dunno.”

You then rephrase the question by holding up the evidence of the once white shirt that is now blue. While looking at the evidence, all of the children become as still and quiet as a stone statue.

Here is where the fun begins. You don’t say nothing and they don’t say nothing. Everybody is waiting everybody out. You’re standing there, with the evidence, looking at them. And they’re sitting there all quiet, looking at you. When all of a sudden, after about five minutes, somebody says something: “I will never admit to doing anything.”

Recognizing their cue, the other children get up and go while the one who just told on himself just sits there with the uh-oh look on his little round face.

You don’t say anything. You just look at the lil’ fella and he knows that mama’s look means three months loss of allowance money. He puts his little head down, and pushes out the tears, hoping that the water works will make mama show him some mercy. But, she doesn’t.

The poor lil’ chap has to give up three months of his allowance money and his dreams of getting that new PS2 game that he wanted, all because he told on himself when he uttered those four little words, “I will never admit.”

Go on and take a look down below at some of the things folks tweeted that they’ll never admit to doing.

#IWillNeverAdmit that i.... WAIT!! YOU'RE TRYING TO TRICK ME!! pic.twitter.com/n5Oxc4cgk0