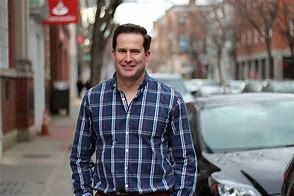 
Seth Moulton wants to be the new
leader of the Democratic Party
by Nathan'ette Burdine: April 22, 2019
Tweet
Follow @nbnylemagazine

Seth Moulton wants to be the new leader of the Democratic Party. That's why he has decided to become candidate number 19 in the 2020 Democratic Presidential race.

I’m running for President to build a strong and safe country, create the jobs of the future, and elect leaders we can be proud of. Join our mission: https://t.co/9caxN9579q. https://t.co/Pyr6IRNq5e

Seth Moulton is going to focus on the economy and national security. That’s what he’s going to do.

For many of y’all who don’t remember, Moulton appeared on MSNBC’s “Morning Joe” last year talking about what he believes the Democratic Party needs in order to take back the House, the Senate, and the White House.

Seth Moulton told everybody around the “Morning Joe” table that the Democrats can’t just hate on Trump. They need ideas that’ll get folks off the couch, off the corner, and into a job somewhere.

Let ol’ Seth Moulton tell it, this can’t be achieved if the Democrats keep ol’ girl Nancy Pelosi around. “We need new leaders. We need a new vision. We need a forward looking vision. It’s time I think for a new generation of leadership in our party,” is what the young congressman, who was born during the late 70s, told all the folks sitting around the Morning Joe table.

Needless to say, the youngster’s comment about getting rid of somebody who’s been governing about as long as he’s been living caused Kasie Hunt to ask a very, very, very important question.

And that very, very, very important question was, “Who is the leader of the Democratic Party?” All of sudden, Moulton became a parrot, repeating the question back to Hunt and then going silent; which caused all the grown folks around the table to start laughing at the youngster.

"Who is the leader of the Democratic Party?" Seth Moulton
repeated the question back to Kasie Hunt.

Mike Barnicle giggled and threw his two cents in with, "That’s
what she asked. She asked you that."

"Does my silence say something?" Seth Moulton answered in what
appeared to be his recognition that he was being presented a
challenge that he couldn't handle.

"Yeah. It Does," said Mika Brzezinski in order to let Seth Moulton
know they just aren't feeling him as the new voice of the
Democratic Party.

If y’all are thinking that Moulton went back to talking about Pelosi, then y’all are right.

Moulton, who for some reason or the other thought he could wheel Pelosi out of the Speakership, was like a lil’ Marco Rubio going back to his same line: “This is the challenge we have. I don’t think that people are looking at Leader Pelosi, with all due respect to her and saying, ‘Here is the future of our party.’"

That’s right folks. Moulton believes a person who has more experience in life and government than he has in living and government doesn’t know how to move the party ahead.

He’s not stopping to think about the fact that a person can’t bring all parts of a group together if they don’t know how the parts work within the system that they are in. And this is where Moulton is.

Moulton just got there. He just has ideas that he doesn’t know how to put forth. You can’t move a pebble if you don’t have the strength to do so. And that’s where Moulton is.

He can’t even move his ideas. So how in good God’s name is he going to move the Democratic Party, let alone the country, in the right direction? He can’t do it.

Another problem he has is that he is going up against another congressional member, Senator Elizabeth Warren, from his state of Massachusetts. Senator Warren can tell you about the banking rules and regulations in her sleep.

Moulton can’t even tell you the meaning of the "Hakuna Matata" song. And everybody who grew up in the 90s knows that song.

So how in the heck he’s going to be over anything; especially since his lack of knowledge and experience will cause him to bring nothing but trouble. Name one committee he’s on. I’ll wait. Mm-hmm, just like I thought.

Y’all don’t know that fella. And if y’all don’t believe me about how inept this young fella is to even lead himself to the nearest Starbucks, just take a look at the tweets down below to see what folks really think about this young one who wants to be the leader of the Democratic Party and our next president of the United States.

The ex-Marine who tried to boot Nancy Pelosi from leadership has entered the crowded Democratic field. Seth Moulton from Massachusetts is the latest Dem to enter. Biden has said he wants to be the last to announce. https://t.co/joLYzouD5S

dem 2020 run announcements are becoming like NYT wedding announcements, updates on the lives of people you feel like you perhaps should've known but lack any memory of https://t.co/aO40j7Gf2B

Imagine being Seth Moulton, looking at this presidential candidate field, and deciding that what’s missing is you https://t.co/spIJNOZPQb