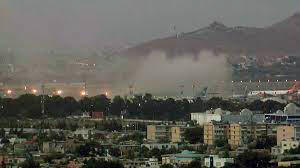 
Several United States service
members were killed during a
suicide attack carried out by
ISIS-K at the Hamid Karzai
International Airport in Kabul
by Nathan'ette Burdine: August 26, 2021
Tweet
Follow @nbnylemagazine

General Kenneth F. McKenzie, who is the Commander of the U.S. Central Command, has confirmed that 12 U.S. service members were killed and 15 were wounded during a suicide attack carried out by the terrorists group, ISIS-K, at the entrance of Abbey Gate at the Hamid Karzai International Airport (HKIA).

ISIS-K carried out a second attack near the Baron Hotel. A total of 140 people are wounded and more than 60 people are dead.

The attacks come just five days shy of the August 31, 2021, deadline the U.S. has to evacuate a little over 1,000 Americans out of Afghanistan.

General McKenzie says the U.S. military will continue working with the Taliban in order to secure the area around the airport.

The general also stated that there continues to be “active threats” against the U.S. and that they are prepared for the “multiple attacks” that will most likely follow today’s attacks.

General Kenneth F. McKenzie went on to say that today’s attack will not result in a troop increase due to the U.S. having “the forces we need to protect ourselves there.”