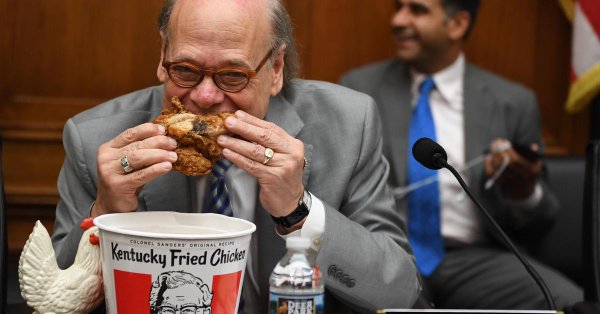 Congressman Steve Cohen (D-TN) told CNN’s Wolf Blitzer that he regretted “biting into” Kentucky Fried Chicken’s (KFC) chicken. Cohen said to Blitzer, “The only regret I have is that I bit into the chicken.”

Cohen said KFC's chicken is nasty and that it doesn’t taste how it originally tasted when it first came out.

Here’s how Steve Cohen describe the nasty chicken to Chris Cuomo during his appearance on Cuomo Prime Time: “I shouldn’t’ve eaten it. It didn’t taste good and it didn’t picture well…It was cold so the skin was pretty awful.”

Despite how nasty the chicken was, Cohen does believe some good came out of it. The good being that the Chicken Barr hashtag was trending on Twitter.

#ChickenBarr won’t be appearing before @HouseJudiciary tomorrow. The Attorney General shouldn’t be afraid of taking questions from counsel or members. Contemptible behavior. Fortunately, we have subpoenas ready. pic.twitter.com/a4QecbqcHN

It’s official... a plastic chicken where a U.S. Attorney General should be. #ChickenBarr pic.twitter.com/CHfoaiPSvo

#ChickenBarr why did the chicken cross the road? Because he was afraid to testify.... pic.twitter.com/eYFID3b7YU

I realize that Dems haven't yet sent any subpoenas or brought up a contempt motion, but they got #ChickenBarr trending on Twitter so justice has been served.

KFC has not tweeted a response to Cohen telling everybody about how nasty KFC’s chicken really is.

The distinguish gentleman from Tennessee decided to order himself some KFC as a joke about how “chicken” Attorney General William Barr was to testify before the House Judiciary Committee about Robert Mueller’s letter questioning why Barr lowered the bar when deciding on whether Donald Trump obstructed justice or not.

Barr told the Democrats in the House that he didn’t want to talk to them.

And I can see why.  The House is controlled by the Democrats whose line of questioning would have had Barr dancing on a bed of hot coals just like Senator Kamala Harris did during his hearing before the Senate Judiciary Committee.

That heat Harris was giving to Barr had his head spinning so that the poor man didn’t know what “yes,” “no,” or “suggested” mean.

He didn’t want to go through that again especially knowing that unlike the Senate there would be nobody to answer his SOS call.

Barr can stand the hit coming from being held in contempt, but he couldn’t take that heat coming from all of those questions highlighting how he’s just a tool for Donald Trump. That type of heat will probably lead to Barr being impeach.

Considering the fact that he’s just the United States attorney general and not the president of the United States, Barr wouldn’t get the public support to hold on to that real good federal job he has.

Then there’s that whole possibility of getting disbarred. Just ask former President William Jefferson Clinton about that one and how his law license were taken away after it came out that he lied about what he was doing with his "extra" time.

Therefore, if a president can be disbarred, just think what will happen to an attorney general who gets caught in a web of lies.

Chicken is what Barr decided to be because things weren’t looking good for him if he testified before the House Judiciary Committee.