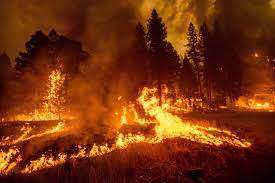 
The Dixie Fire has burn over half a
million acres of land
by Nathan'ette Burdine: August 14, 2021
Tweet
Follow @nbnylemagazine

The burning of 1,045 buildings, which includes 550 homes, and the scorching of over 500,000 acres of land has helped the Dixie Fire to knock the Creek Fire off its pedestal as California’s largest single wildfire ever!

Mind you, now, folks, being a single fire doesn’t limit the Dixie Fire’s ability to knock off the largest three complex fire, the August Complex, as California’s largest wildfire ever.

Wednesday, July 14, 2021, is when the Dixie Fire was set ablaze on Dixie Road which it, Dixie Fire, was named after. And in less than one month, the Dixie Fire has managed to overtake the Creek Fire which took from the fourth of September 2020 to a few days before Christmas morning 2020 to char over 850 buildings while lighting up over 379,000 acres.

This, of course, isn’t good news because it means that Californians will have to pay somewhere north of $900 million in order to make a new what the Dixie Fire has made quick due away with.

Some of you are wondering how I came up with the $900 million number. Well, the Creek Fire, which was the largest single fire in California’s history before the Dixie Fire came burning along, cost the state north of $693 million ($193 million to get the fire under control plus over $500 million to rebuild).

Like the lot of us who would want answers, these folks want to know what or who caused them to lose their life’s work and or their homes. The U.S. Forest Service investigators have an answer for them. And the answer is a who named Gary Maynard.

The professor, however, says he didn’t do anything and that the law has the wrong man. The law says a witness statement, a tracking device on his car, and his tires are all why they beg to differ.

The one thing the professor has going in his favor is the fact that the feds say they don’t know how or with what the professor allegedly used to start California’s largest single wildfire that is about to become the state’s largest wildfire ever!