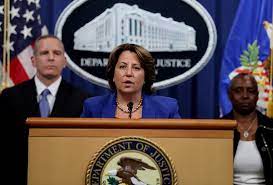 Colonial Pipeline got some good news, on Monday! The Federal Bureau of Investigation (FBI) has gotten back $2.3 million of the nearly $5 million the Colonial Pipeline folks paid in cryptocurrency to the DarkSide hackers who, for over a week, shutdown Colonial Pipeline’s gas lines throughout the Southeast and Northeast.

According to the Department of Justice’s (DOJ) press release , “following the money” is how the FBI recovered 63.7 bitcoins that have a total value of $2.3 million. “Following the money remains one of the most basic, yet powerful tools we have,” is what the DOJ quoted Deputy Attorney General Lisa O. Monaco as saying.

Due to the Colonial Pipeline folks reporting the ransom attack and payment, early on, to the FBI, the FBI was able to track the nearly 75 bitcoins that were paid to the hacking group. More specifically, the FBI used a password to enter the site where the bitcoins were located.

After entering the site, the FBI got access to the bitcoins and then transferred the money back to the Colonial Pipeline folks. The DarkSide hackers, no doubt, are madder than a gator with a hang nail about the nearly $5 million in cryptocurrency going back to their victims. The DarkSide hackers are like, “Thanks to the FBI being the party poopers that they are, our plan to get rich by stealing from the wealthy has gone to pots.”

In all seriousness, the Colonial Pipeline folks are lucky that the FBI were able to recover $2.3 million of the nearly $5 million that was paid to Darkside because in more cases than not the hackers get the bitcoins, immediately convert the bitcoins into legal tender, and then go on about their business.

The FBI has said that the agency does not encourage anyone to pay the hackers because it encourages the hackers to continue hacking until their stacking the dollar, dollar bills yo’.

And that’s kind of surprising, huh, considering the fact that the DarkSide hackers have been working and living on the dark side in the digital space for some time, now.

Welp, I guess the U.S. government has their reasons for not sanctioning the DarkSide hackers. What those reasons are?! I don’t know.

But I do know that Colonial Pipeline walked through a pile of hot coals in order to make sure that DarkSide wasn’t one of those sanctioned criminals who could get them, Colonial Pipeline, placed on the wrong side of the law.

Lesson-Hacking ain’t a sure way to get rich off the wealthy if you’re on the U.S. government’s sanction list.