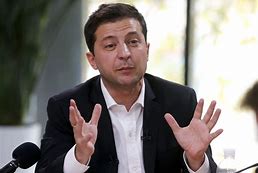 Ukrainian President Volodomyr Zelensky doesn’t want y’all running around here thinking he’s thinking about how he can be the political Wizard of Oz who influences “American politics this way or that way.”

Zelensky is a busy man who’s just trying to transition from his previous job of being a comedian to being a statesman.

He has a lot on his plate like figuring out how to get Crimea back from Vladimir Putin’s vice grip and getting those devils who told everybody about the Bidens’ alleged shady dealings with the Ukrainian company Burisma Energy.

Because you know, it was all due to that mess with the Bidens and Burisma that Trump was able to take his pudgy little fingers, there, to grab Zelensky by the short and curlies. And the one thing that Zelensky doesn’t like being is grabbed by the short and curlies. That hurts! It stings! It leaves a man all curled up in the fetal position, which is a position the freshmen statesman can’t afford to be in.

I can’t fault the man for not wanting to be in other folks’ mess. The only problem is he placed himself in a position to be in the U.S.’ mess.

Now, I know Volodomyr is going around, telling folks that president didn’t try to “Shanghai Noon” him during their land line call on July 25, 2019.

But all of those words don’t amount to a hill of beans when compared to Volodomyr’s action of not releasing the Ukrainian version of the call transcript between him and the president. Inquiring minds want to know what is on the call transcript that Volodomyr doesn’t want us to know that they’ve transcribed?

Hmm, that means the Ukrainians transcribe the land line call the right way but Volodomyr is going about this whole thing the wrong way. Hmm…To tell y’all the truth, I can’t blame the man. His next door neighbor, Vladimir, has already stolen part of his property and won’t give it back. And “Vlad the Wanna Be Impaler” has struck the fear of God into the American president so to the point that he’s made him a sitting duck who can’t do anything without his, Vlad’s, approval.

So yeah, what’s the comedian turned politician suppose to do when the country he depends upon has a commander-in-chief who’s a tool of the man who stole his, Volodomyr, land?