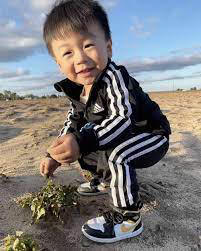 
The Wu family were not targets
in a freeway gunfight that killed
toddler Jasper Wu
by Nathan'ette Burdine: November 9, 2021
Tweet
Follow @nbnylemagazine

The California Highway Patrol (CHP) does not believe that the Wu family were targets in a Saturday afternoon, freeway gunfight that ended with 23-month-old Jason Wu being killed. “Evidence collected on the north bound side of the freeway may indicate the victims were not targeted and the child passenger was struck by a stray bullet,” is what abc 7 LA folks quoted the CHP as saying.

The stray bullet struck 23-month-old Jasper Wu in the head as he slept in the backseat of his mother’s car. 9-11 was called. The EMTs arrived and saw the little fella in a dire state. An EMT put pressure on the wound, while another EMT breathed his breath into the little fella’s body. They talked to the little man. They told him to hang in there and to keep fighting.

In an effort to give the little fella a fighting chance, the EMTS “Superman” down the road to Oakland Children’s Hospital. Rubber burning, sirens sounding, and folks moving out of the way is the scene that took place that day.

And it’s certain that if folks knew who the EMTs were trying to save they would have followed the ambulance to the hospital to help in any way they could. The one thing nobody likes seeing is a sick and or dying child.

It’s an image that neither the eyes, heart, mind, or soul can bear. “We heard it was a shooting, an hour later we heard a child was involved; it’s just heartbreaking,” is what a fella by the name of Mike told the abc 7 LA folks.

“Heartbreaking” it is. The nurses and doctors at Oakland Children’s Hospital used all of their skills and knowledge in order to keep Jason Wu’s mother from experiencing that heartbreak of a mother losing her child.

But, the head wound caused by the stray bullet from the freeway gunfight was just too severe. “The reality is, this is insanity. I see it everyday, gang activity has risen, especially when it comes to little ones, some ones family member, its unacceptable,” is what Oakland City Council Member Noel Gallo told the abc 7 LA folks.

The CHP has asked the public to provide them with any information they have about the suspects who remain at large.