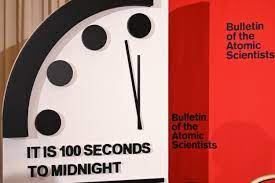 
The scientists over at the Bulletin
of the Atomic Scientists list ways
the humans can stop the Doomsday
Clock
by Nathan'ette Burdine: January 25, 2022
Tweet
Follow @nbnylemagazine

As long as the humans take some important steps to prevent their extinction, the scientists over at the 75-year-old Bulletin of the Atomic Scientists say there’s no need to worry about that one minute and forty seconds time they’ve set for Doomsday.

“Our decision to keep the Doomsday Clock at 100 seconds to midnight is a clear warning to the world. We need to back away from the doorstep of doom. Immediate, practical steps to protect humanity from the major global threats that we have outlined are needed,” is what the science folks over at the Bulletin of Atomic Scientists said.

Putin pootin’ on everything, the climate changing, COVID-19 killing, Kim Jung-un’ constant attempts at nuking, Xi Jinping trying to be a king, Ol’ Joe not knowing, and all the crazies in the world coming out the woodworks led the science folks to conclude that the humans are doomed.

The scientists over at the Bulletin of the Atomic Scientists made a list on how to do just that:

1. The Russian and US presidents should identify more ambitious
and comprehensive limits on nuclear weapons and delivery
systems by the end of 2022. They should both agree to reduce
reliance on nuclear weapons by limiting their roles, missions,
and platforms, and decrease budgets accordingly.

2. Russia should rejoin the NATO-Russia Council and collaborate
on risk-reduction and escalation-avoidance measures.

Uhhh, that last one there ain’t gonna work, right now. Russian President Vladimir Putin is busy trying to provoke the U.S. and NATO into mitch slapping him just so he can play the victim and use that in order to do what Pinky stopped the Brain from doing; which is taking over the world.

Plus, Putin’s lil’ Russian soldiers lining the Ukrainian border is a repeat of 2014 when Putin took Crimea and Sevastopol from Ukraine. Déjà vu all over again ain’t what the U.S. and the NATO allies are trying to have happen again. Therefore, the NATO-Russia Council (NRC), is a no go, for now!

What may be a go are some of the other ways in which the science folks over at the Bulletin of the Atomic Scientists believe the human folks can stop themselves from becoming extinct:

3. The United States and other countries should accelerate their
decarbonization, matching policies to commitments. China
should set an example by pursing sustainable development
pathways-not fossil fuel-intensive projects-in the Belt and Road
Initiative.

China would disagree and be like, “No, no, no! Not true! We’re helping, not hurting, people.” The truth, though, is in the pudding and that pudding ain’t lying.

Wait a minute! This here with China and that whole NATO-Russia Council bit is enough to say, “Don’t pay attention to everything the science folks over at the Bulletin of the Atomic Scientists are saying.”

Sure, the science folks over at the Bulletin of the Atomic Scientists are right that you humans are killing yourselves and that y’all need to at least talk it out in order to work it out. But a good portion of that other stuff, unh-unh.

All you humans need to do in order to not go extinct before the Earth does is to stop doing all the wrong y’all are doing, now!