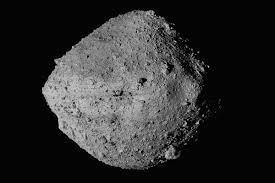 
There is a wee bit chance that Asteroid
Bennu will hit Earth
by Nathan'ette Burdine: August 14, 2021
Tweet
Follow @nbnylemagazine

Now, now, now, don’t y’all go getting y’all’s panties in a bunch about D-day a-coming. None of y’all will be here in 2182! And if by some snowball chance in Lucifer’s kingdom y’all are here, then I’m sure y’all will do as the dinosaurs did and transition to a different state of being. So yeah, everything will work out!

Come to think of it, the chances of things working out increase from “1 in 2,700 (or about 0.037%)” to “1 in 1,750 (or 0.057%)." The folks over at NASA say they came up with the probabilities of Bennu making a fiery entrance through our planet’s atmosphere after combing through data they gathered from the Origins, Spectral Interpretation, Resource, Identification, Security-Regolith Explorer (OSIRIS-REx) spacecraft which landed, last year, on the ancient asteroid.

“NASA’s Planetary Defense mission is to find and monitor asteroids and comets that can come near Earth and may pose a hazard to our planet. We carry out this endeavor through continuing astronomical surveys that collect data to discover previously unknown objects and refine our orbital models for them. The OSIRIS-REx mission has provided an extraordinary opportunity to refine and test these models, helping us better predict where Bennu will be when it makes its close approach to Earth more than a century from now,” is what the NASA folks quoted Kelly Fast as saying.

Kelly Fast works for NASA, over at its Washington D.C. headquarters, as the program manager for the Near-Earth Object Observations Program. So yeah, she knows her stuff.

Having said that, neither Kelly Fast or any other brainy body at NASA has figured out how to stop the ornery asteroid from possibly being the reason why life starts anew here on planet Earth.

Hm, well maybe someone will figure that one out before the 24th of September 2182 comes around.