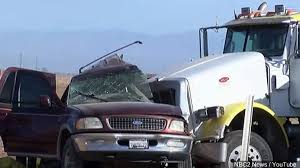 Around 6:30AM Tuesday morning in Calexico, California, 13 people were killed on state Route 115 after a semi-truck hit a Ford Expedition SUV sending several people flying through the front windshield dead onto the road.

There were a total of 25 people in the SUV when the crash occurred. The ages of the individuals, in the SUV, range from 15-53. The semi-truck driver is a 69-year-old man who lives in El Centro, California, which is 11.4 miles, 19 minutes, from Calexico, California.

The driver, a Mexican citizen, and the front passenger were sitting in their seats. However, the driver was not so lucky because he was pronounced dead at the scene. The front seat passenger is among the 12 others who were injured during the crash.

Due to the semi-truck contracting the Ford Expedition SUV on impact, the front seat passenger was cut out of the vehicle so that the other passengers could be removed as well.

The injuries of the those who were hurt in the crash range from minor to life threatening with some receiving injuries as small as cuts and bruises to more critical injuries to their heads and or chests.

Due to the fact that 10 of the 13 people who died during the crash are Mexican citizens, the United States is working with Mexico to identify the victims so that they can then identify their family members.

The investigation into the cause of the crash is ongoing with investigations being conducted by the California Highway Patrol, Imperial County Sheriff’s Department, U.S. Border Patrol, and the National Transportation Safety Board.