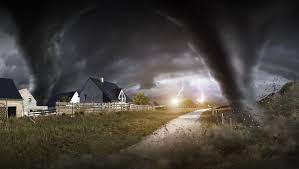 For four days, over 30 tornadoes, with the lot of them being in Mississippi, ripped through the southern part of the United States.

Trees uprooted, rivers flooded into the streets, hail knocked out windows, cars and semi-trucks pancake stacked on top of each other in the middle of the road, and homes and businesses reduced to rubble are the sad sights that southerners had to lay their eyes upon.

All of the hellraising the tornadoes did has left three people hospitalized, three people dead, and over 200,000 business folks and homeowners without power.

Three semi-truck drivers, two of whom had to be removed with the Jaws of Life, were hospitalized in Texas. The two people in Georgia and the one person in Tennessee who were killed died after trees uprooted and came crashing down on top of them.

The woman in Tennessee who was killed died after a tree uprooted and crashed on top of her mobile home.

The system that brought in the parade of deadly twisters hung around the South through the early morning hours, on Wednesday, before heading out along the eastern coastline where it will continue assaulting us poor humans with its pouring rain, blowing winds, and humongous hail balls.