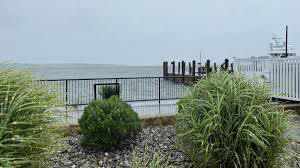 If that ain’t the eggs without the sausages and biscuits! Tropical Storm Henri has now decided to become Tropical Depression Henri.

Tropical Depression #Henri Advisory 28A: Henri Weakening But Still Expected to Produce Heavy Rainfall and Flooding Across Portions of Southern New England and The Northern Mid-Atlantic States Through Monday. https://t.co/VqHn0u1vgc

No doubt the change Mr. Henri has made is quite the surprise, quite the surprise especially considering the fact that he had everybody thinking that after his decision to transition from a Category 1 hurricane to a tropical storm that he was just going to cruise up the Northeastern coast as the latter.

Don’t get me wrong, now! The 35 mph winds that Mr. Henri is passing won’t make life any easier for us humans. The damage he is doing in his tropical depression state will be added on top of the damage he did as a Category 1 hurricane and a tropical storm.

All of the flash flooding, storm surges, and down power lines have impacted folks all the way up from New Jersey to Maine.

And now, with the tropical depression status, Mr. Henri is just adding a third layer to the double decker choc’ cake he’s dumped on the Northeastern states.