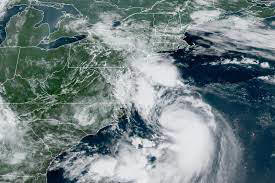 During its travels up the eastern shores, Tropical Storm Henri will be dumping loads of rain and passing tons of wind. The combination of rain dumping and wind passing will cause flash flooding, storm surges, high surf and rip currents and tornadoes.

The governors in all four states have issued state of emergencies warning residents to seek shelter and to not go outside and play in the rain. Because if they do, they could easily find themselves cast out into the Atlantic Ocean where Tropical Storm Henri is expected to return sometime early Wednesday morning.