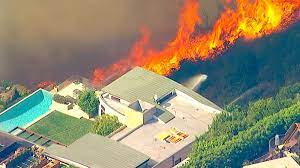 
Two people have been questioned in
the ongoing investigation concerning
the cause of the Palisades Fire
by Nathan'ette Burdine: May 17, 2021
Tweet
Follow @nbnylemagazine

Two people have been questioned in the ongoing investigation concerning the cause of the Palisades Fire that has burned 1,325 acres of brush surrounding the well-manicured homes and palatial mansions of the rich and famous living in the Santa Monica Mountains.

Arson Investigators with the Los Angeles Fire Department (LAFD) and investigators with the Los Angeles Police Department (LAPD) had a lil’ conversation with two individuals about whether they are the who that caused the what, Palisades Fire, to spread when, 10 o’clock Friday night, everybody else were out legally enjoying the beginning of the weekend.

It’s no doubt that both individuals, who were questioned, said that they are as innocent as a lamb. They were probably like, “Me?! No, not me!”

The LAFD and LAPD, however, only believed one of the individuals who professed his or her innocence and therefore decided to let him or her go. As for the other individual, well, it’s more likely than not that person is going all typewriters on the fingernails, hoping that the LAFD and LAPD find another suspect to question about whether he or she was the who causing the what, Palisades Fire, to spread when, 10 o’clock Friday night , all the normal folks were out having a legal good time.

Folks, its always best to think Smokey Bear and not Fire Marshal Bill Burns. Just look at the Palisades Fire that has had two days to spread to 1,325 acres surrounding the well-manicured lawns and palatial mansions of Hollywood’s and Silicon Valley’s rich and famous living in the Santa Monica Mountains.

Sure, they can afford to buy another palatial mansion with a well-manicured lawn, but that ain’t the point. The point is folks don’t like spending their money unnecessarily. And folks spend their money unnecessarily whenever somebody gets the “Fire Marshal Bill Burns” fire itch causing him or her to burn the first row of trees and piece of dirt that he or she sees.

Fire spreads! But most importantly, fire spreads in dry conditions which California currently has. The rain not liking California has caused the state to have drought conditions ranging from hm to good God!

And then to top it off, the fire likes to mess with you. Fire will do crazy things like stop for moment, making you think it’s calm down, and then the next thing you know the fire is everywhere; which is where the Palisades Fire was on Saturday afternoon.

It’s Monday morning, now, and the Palisades Fire is still making its rounds around Santa Monica Mountains and showing no signs of slowing down.