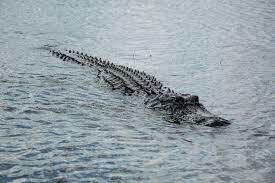 Alligator lookiing for food in the water


Woman says her husband was not on
the porch where she left him after she
returned from getting help to treat his
injuries caused by a gator
by Nathan'ette Burdine: September 2, 2021
Tweet
Follow @nbnylemagazine

Hurricane Ida has spit out so much water throughout Louisiana that she has made residential roads waterways for hungry gators. Case in point, a woman’s husband had a not so good encounter with a large gator that thought the man was lunch.

Around 12 O’clock in the PM, the 71-year-old husband went outside his home in Avery Estates in Slidell, Louisiana, and began walking the water filled roads.

A gator spotted him during his walk and decided to make him his lunch. The gator slowly approached the 71-year-old man who had no warning of what was behind him. No smell! No sound! No movement, except his and the water! No nothing! Being the professional killer he or she is, the gator attacked the man.

The man’s wife heard all of the ruckus going on, looked up, and ran out to help her husband. She got there in time to help scare the gator off.

Everyone fears the worse because the gator, well…yeah, y’all get the picture. It’s not pretty. Not pretty at all. The St. Tammany Parish Sheriff’s deputies went out in their flatboats and trucks that sit high up off the ground in search of the husband and the man-eating gator that they will put down. The case remains open and will most likely be close once the deputies find the 71-year-old man or the man-eating gator.

Sheriff Randy Smith has warned the residents of Slidell, Louisiana, that if they don’t want to be the man-eating gator’s lunch or the victim of some other scary creatures from the swamp then they need not venture out into the water covered streets that may be the swamp creatures’ temporary home for now.