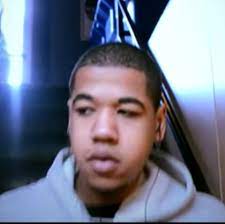 For some reason or another, 28-year-old Yannick Bandaogo decided that he would get up on Saturday and go to a public library not to put knowledge in his head but to put knife wounds deep down into the flesh of his fellow human beings so to the point that he ended up killing one woman and injuring six others.

A young fella by the name of Ethan Pineda, who was less than 24 hours away from celebrating his 18th birthday, had the unfortunate experience of witnessing the deadly attack while he was busy at work, at the Booster juice, which is right next door to the mall and Lynn Valley Public Library.

There young Ethan Pineda was serving up juices at the Booster Juice when all of a sudden, here comes a killer, flashing before Ethan Pineda’s then 17-year-old eyeballs, with a “very large…knife” stabbing an elderly, 60 something year old man and another person who was in “an accessible washroom.”

Scared out of his wits, Ethan Pineda immediately locked up the Booster Juice and called the police. The police came in with the unit and reportedly shot that Yannick Bandaogo devil with rubber bullets, rendering him helpless, and then quickly arrested him.

There he is, down there on that gurney, all shot up with rubber bullets. 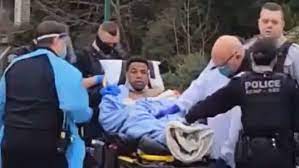 Just look at him! I bet you he on the left is saying to himself on the right, “Naw brah, You shouldn’t’ve done that!” 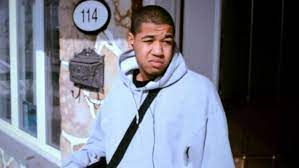 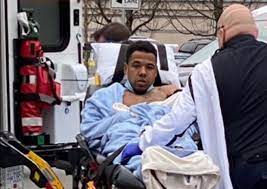 Welp, brah done done it. And as to be expected, ain’t nobody happy about brah, Yannick Bandaogo, stabbing and killing folks in their quiet little enclave. “How the hell can this happen in North Van? I grew up five-minutes from here,” is what Rylan Harvey told the CBC folks.


My heart is in North Vancouver tonight. To everyone affected by this violent incident in Lynn Valley, know that all Canadians are keeping you in our thoughts and wishing a speedy recovery to the injured. https://t.co/8Q32wuOlTk

Sgt. Frank Jang, however, didn’t go into detail about what run-ins Yannick Bandaogo has had with the law.

And to be honest with you, it really doesn’t matter what Yannick Bandaogo’s run-ins were with the law because his action of going all Freddy Krueger on folks has gotten him a long, long stay-in with the law.